We involve our guides in the running of the company, and take a direct and personal interest in ensuring that your expectactions are met and you have a good time. Our trips offer excellent value-for-money, providing quality hut facilities and experienced and enthusiastic guides with a high standard of service and attention to detail from food to equipment.

We look forward to guiding you on your next adventure!

The background of Alpine Recreation and how the company was founded.
+ 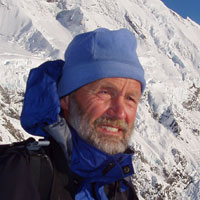 A former nuclear physicist, Gottlieb came to New Zealand in 1978 as an IFMGA qualified mountain and ski guide. With 46 years of mountaineering and 36 years of professional guiding experience, his most notable climbing achievements included the first ascent of the entire Peuterey Ridge of Mont Blanc, all New Zealand 3000m peaks during a single winter, a winter ascent of Cerro Fitz Roy, three winter crossings of the Patagonian Ice Cap, 27 ascents of Aoraki Mount Cook, 8 ascents of Mount Tasman and a traverse of Denali (Mount McKinley). Gottlieb pioneered many ski touring routes in Europe and in New Zealand, including the Symphony on Skis.

Gottlieb was passionate about the mountain environment he worked in, campaigning for conservation issues as a member of the Canterbury - Aoraki Conservation Board from 2003 to 2008.

When Gottlieb emigrated from Germany in 1978 he was invited to become involved with the New Zealand Mountain Guides Association and assisted them to gain international recognition for their training and assessment scheme. This they gained in 1981 and Gottlieb continued for many years to train and assess many of New Zealand's well-known mountain guides, who went on to set up guiding companies of their own.

Gottlieb contributed a significant amount of time and effort to safety research within the international guiding community. A number of his articles have been published in Europe and Canada.

Gottlieb died suddenly on 14 August 2008 from a ruptured aorta while guiding a group including then Prime Minister Helen Clark. The Memories of Gottlieb website contains articles, tributes and photos to a talented and great man who died before his time.

Gottlieb and Anne Braun-Elwert founded Alpine Recreation Canterbury Ltd. together in 1981. They were the first outdoor adventure company in New Zealand to offer ski touring using cross-country and telemark skis. In 1985 they built Rex Simpson Hut in the Two Thumb Range in the high country above Lake Tekapo to use as a base for ski touring and snowshoeing in winter and for the Tekapo Trek in summer. With the building of a second private hut (Caroline Hut) in Aoraki Mount Cook National Park, they established the Ball Pass trekking operation. Since 1981 they have been the preferred operator for the German Alpine Club's trekking tours of New Zealand, and continue to gain tourism awards for quality, eco-tourism and natural heritage.

After 32 years of operation Alpine Recreation continues to stay at the forefront of mountain guiding in New Zealand. We are a member of the Tourism Industry Association of New Zealand and are Outdoors Mark certified. We employ IFMGA and NZMGA certified guides.

We aim to provide you with a safe, friendly and sustainable service.
+

We aim to give you one of your most memorable mountain holidays, the satisfaction that comes from meeting new challenges and achieving new goals and the stimulation that comes from new experiences and new friendships; all the while keeping in tune with the natural environment and ensuring that those who come after us find it just as good or better than we found it.

How are we different?

What sets Alpine Recreation apart from other guiding companies.
+

Caroline Hut is our base for Ball Pass treks and Introductory Mountaineering and Intensive Mountaineering Skills Courses. It is located on Ball Ridge, opposite the 2000m high Caroline Face of Aoraki / Mount Cook. It is the only owner-operated hut in Mount Cook National Park. Rex Simpson Hut in the Two Thumb Range provides an excellent base for hiking in summerr and ski touring, snowshoeing and our Backcountry Ski and Avalanche Courses in winter.

Both huts are accessed on foot and are clean, well maintained and located in spectacular alpine settings. They are in close proximity to ski runs, climbing crags, snow and ice fields, providing great venues for our instruction courses. Sleeping bags are provided at the huts and your bunk space is guaranteed. Our huts are heated with wood-fired stoves, have solar lighting, and full kitchen facilities with gas cookers. Comprehensive instruction resources are provided, including a hut iPad. Each hut is restocked each year with firewood, gas and non-perishable food.

→ Enjoy the benefits of a lighter pack - a lot of food and equipment is already at the hut.
→ Enjoy a comfortable classroom (even in bad weather), well-equipped and conducive to learning. Ideal instruction terrain is nearby, minimising travel time and maximising instruction time.
→ Our activities are less weather-dependent and less expensive, as we don't need to rely on flying access.

We include equipment in our trip packages, so there are no hidden costs.. Our sturdy Meindl leather mountaineering boots are ideal for the peri-glacial area of Ball Pass.

→ Try out equipment for yourself before committing to buying it in a store.
→ Save space in your luggage and enjoy peace of mind by using our equipment.

We have a catering manager to prepare food: fresh fruit, vegetables, bread, quality cheeses and meats. Together with the gourmet skills of the guides, this ensures a consistently high standard cuisine. All snacks are included. Non-perishable food is provided at the hut.

→ Food quantities are carefully planned and prepared, resulting in minimal waste to be carried out at the end of the trip and minimal effect on the environment.

We aim to reduce our impact on the environment, so that many future generations can also enjoy it.
+

Alpine Recreation reduces its carbon footprint and environmental impact by:

For details please refer to our Environmental Care Action.